Lucknow, the city of nawabs, is packed with some great historical and cultural monuments. Satkhanda in Hussainabad, Lucknow is one of the heritage buildings that reside next to Chota Imam Bada. This red-brick watch-tower is incomplete but nevertheless a true brilliance of heritage architecture. It was constructed by King Mohammed Ali Shah.

I have been fortunate enough to have traveled to Lucknow and gotten a chance to see these hundreds of years old beautiful sites. These historical places have always appealed to history enthusiasts inside me.

Story of Satkhanda in Hussainabad, Lucknow

The term ‘Satkhanda’ refers to a seven-story building. This structure was designed to have seven floors, but development was halted, and only four levels were completed. Mohammed Ali Shah constructed it as a watchtower with the goal of getting a bird’s eye view of Lucknow’s old city and regal buildings. There’s also a legend that the structure was built to allow people to see the moon during Eid.

The development of this structure was believed to be halted when the king injured his leg while descending down the structure’s stairs while it was being built. Since then, people have begun to regard it as a terrible omen and have left it incomplete.

The architectural inspiration behind Satkhanda

Satkhanda, a four-story tower, was inspired by the architectural design of ‘The Leaning Tower of Pisa,’ one of the world’s seven wonders. The architecture of the tower is a mix of Greek and Islamic styles. Its framework and pediments are inspired by Greek architecture, while the arches of the gates and windows are influenced by Islamic architecture.

Structure and design of Satkhanda in Hussainabad, Lucknow

The construction work of Satkhanda was initiated by King Mohammed Ali Shah during his reign in the years 1837-1842. The octagonal ground floor of this construction stands almost 10 feet tall, making it the tower’s tallest story. One of the structure’s distinguishing qualities is that each of its subsequent stories has been built in decreasing order of height and breadth from the foundation story.

Satkhanda stands at a height of roughly 35 feet. Numerous triple-arched enormous windows and chambers may be found throughout the tower. The numerous stories of the building are reached through a spiral staircase. The grandeur of the city’s nearby area may be seen from the tallest story of the facade.

Why you must see Satkhanda

I was in awe when I saw it for the first time. I am always curious to know more and more about our heritage. I loved when I saw this red brick building. This is a must-see place along with the Imambada, clock tower, and Rumi Darwaza. All these places are on the side of one another.

Being lured by just seeing the unfinished tower, has left me wondering as to how amazing it would look when its renovation gets completed. Waah Lucknow

Despite the fact that rehabilitation work has begun and guards have been assigned the task of ensuring the edifice’s safety, the tower remains vacant, with only animals prowling around. The path leading there is uneven and filthy. To make matters worse, the tower’s rear is used as a dump for residential rubbish and as a safe haven for drug dealers.

As a people of India, it’s everyone’s responsibility to take care of our prestigious cultural heritage at all costs. Government cannot do anything unless we start to take ownership of taking care of our great heritage. We must embrace our history and cherish it. 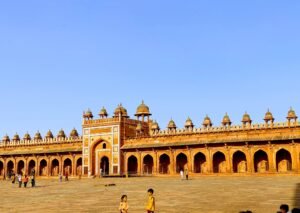 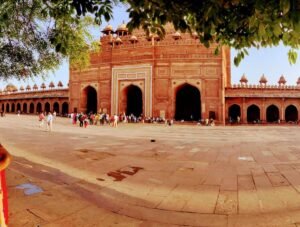